The goal of this project is to understand the process of elastic waves focusing in nonlinear layered media containing discontinuities through numerical simulations and experimental testing. A good example of the considered media are laminated composites, frequently used in engineering applications ranging from aircraft industry to sporting goods. The knowledge resulting from the basic research proposed in this project will be the starting point for the development of nondestructive damage detection techniques that could be used in inhomogeneous layered media where the classical ultrasonic testing fails. 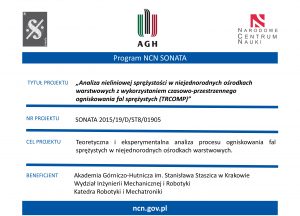