Thermal stability issues are of great importance in high-speed rotating machinery. Bearing sets are especially vulnerable to the problem of excessive temperature growth. The foil bearing technology gives an opportunity to eliminate the standard thermal management approach which is liquid cooling and make the machines oil-free. However, as an effect, the temperature rises for both the bearings and other temperature-sensitive parts of the machinery. In some load cases the thermal instability may occur causing temperature runaway and lead to the bearing fault. The main goal of the project is to investigate the effect of the actively driven thermoelectric materials on the thermal stability of the bearings. The proposed thermal management technique is based on the local multi-point action. The great advantage of the idea is that the power driving the stability system comes from the heat losses of the machine.

The specific construction of the bearing causes nearly 80% of produced heat to be removed by the conduction in the shaft. The remaining 20% is dissipated by the edge leakages and transferred to the bushing through the set of shaft supporting foils. A local difference in heat generation rate can be detrimental to the bearing as it leads to thermal gradients in a foil structure developing both axially and circumferentially. Once developed the thermal gradient may lead to thermal instability and further to the damages of the bearing and the whole machinery. At the moment the only method used in practice to remove the thermal gradient from the bearings is by forced air flow either through the hollow shaft of directly through the foil bumps. The flaw of the abovementioned methods are bulkiness and necessity of delivering a compressed air.

Within the project duration the method for reduction the uneven temperature distribution in the foils with the use of current-controlled thermoelectric modules was proposed. The modules were both axially and circumferentially distributed in the bushing of the bearing and controlled independently. The electric power delivered to the system is calculated based on the temperatures measured by thermocouples mounted in the bushing structure. The numerical simulations performed with a FE model of the complete structure of a foil bearing allowed to study the relationship between the currents supplied to the thermoelectric modules and the temperature distribution on the bump and top foils. Moreover, the metamodelling technique was applied to search for dependencies between temperatures measured in different localizations to show perspectives for reducing the complexity of the control algorithm. A set of uniformly distributed virtual sensors (spread on the top foil) were used to reproduce a real temperature gradient in the bearing with sufficiently high spatial resolution, and discuss the validity of considered localizations of modeled thermocouples on both bump and top foils in terms of feasibility of effective reduction of thermal instability. 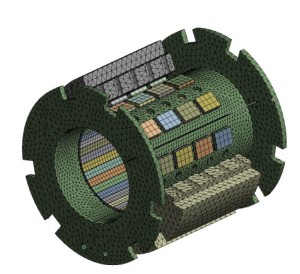 A view of FE model used for simulations